It’s the New Year and it’s time to say goodbye to Christmas decorations (which I still haven’t had time to clear out). I did the first natural dyeing experiment of 2015 using madder powder. I have used it couple of times to give a little kick to some other dye baths but I have never dyed just with it. Madder powder is made from madder roots which is one of the oldest sources of natural dyes. I’ve heard that it’s possible to grow it in southern Finland. Some day when I have a garden I will give it a try.

I had a small sample piece and a recipe I followed. I dyed 100 g of 100% wool yarn. I had mordanted the yarn previously with alum and the cream of tartar. I put 10 litres of water into a big pot and added 20 grams of madder powder in it. I added the wet yarn to the pot and let it stay in the pot for 1 hour. I kept the temperature quite low around 60-70°C.

I was expecting more of an orange colour but the end result is actually pink. But that is the interesting part with madder. Apparently with low temperatures you get more red colours and with higher temperatures more yellows and browns. I tried to reuse the bye bath, but the colour was not getting very strong so I added more madder powder into it. I want to have another try to get orange/brow with madder with using higher temperatures.  Although I really like this pink colour aswell. 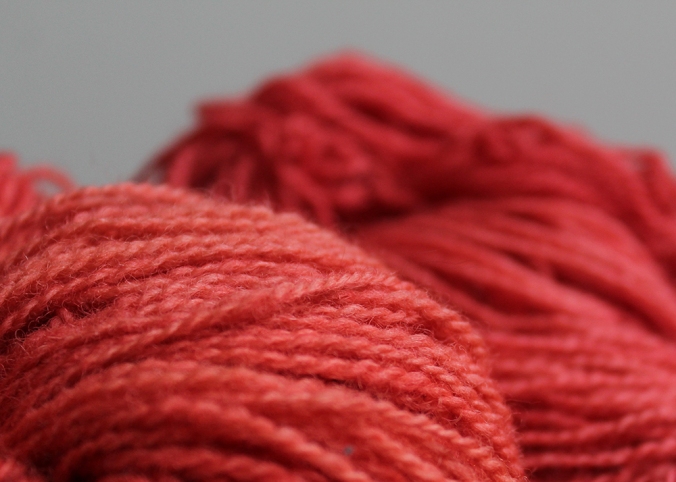